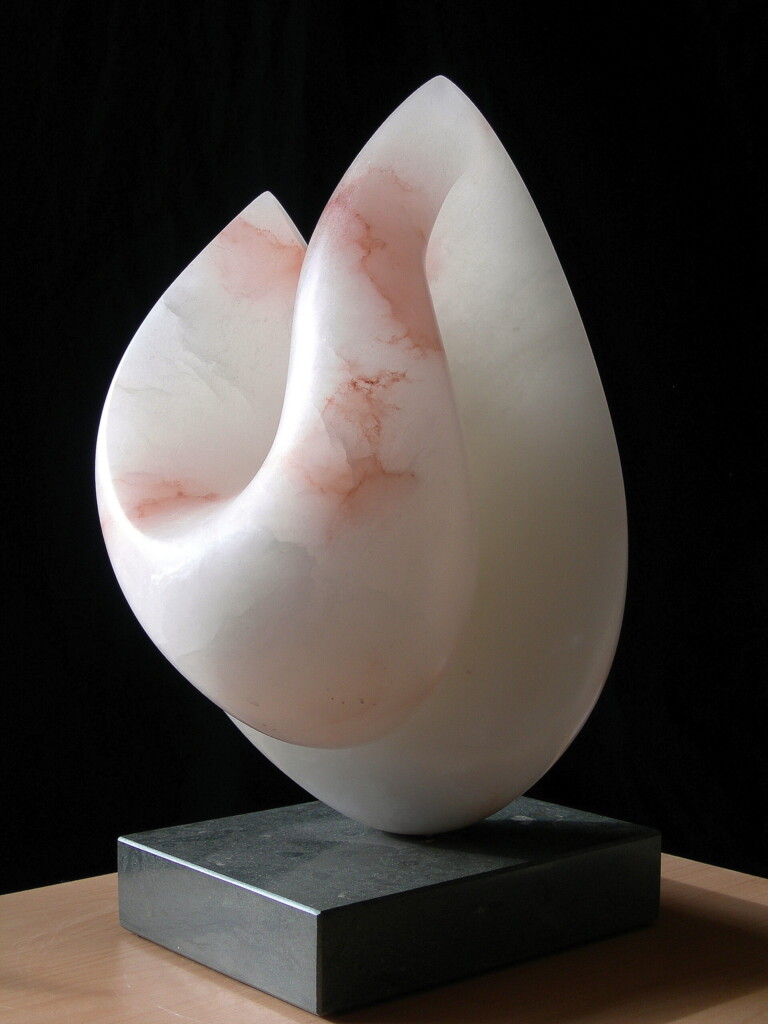 Alabaster for carving is a great stone to work with. It is neither too hard, nor too soft. But it is its translucency that mostly contributes to its beauty. My preference for this stone goes back to 2002 when I made my first alabaster sculpture. And nine other alabaster sculptures followed. Due to its translucent appearance, alabaster is best suited for simple or abstract forms. Details are often totally absorbed by the translucency of the stone and as a result they are no longer very visible. The translucency of the stone becomes apparent at a mere five centimeter. Carve any deeper and the light shines gorgeously and diffusely throughout. Once polished, (sun)light will reveal the beauty of the stone. If the marble appearance of the stone and the effects of light appeal to you, then alabaster has a great deal to offer.

VARIETIES OF ALABASTER
Alabaster is a limestone, a semi crystal of gypsum. It is found in the ground in the form of spheres or boulders on sites in Spain, Italy and Egypt among others. It can display a milky white color with translucent veins or streaks or it can be clear-white translucent, pink or black, or it can come in reddish or caramel brown hues. There are also blue-white or plain blue stones. The color is determined by its place of origin. It is the soil and the oxides within that soil that give alabaster its color. The soil in Spain is red and the alabaster originating there can vary from the color of honey to dark pink. The grey soil of Italy gives alabaster a greyish white look. Raw alabaster may display irregularities on its surface. These are caused by clay impurities and particles found in the stone. These impurities are typical for alabaster and they further increase its charm. However, I generally remove most of this irregular outer layer because the fissures on the surface of the stone make it unpredictable. Therefore I first “peel” the stone in a manner of speaking with a tooth chisel after which I can begin shaping the stone.

THE SCULPTING PROCESS
The hardness of alabaster is soft to medium. The plain white variety of alabaster is only slightly harder than soapstone, while alabaster of other colors is somewhat harder. In the blue-white alabaster it is the blue parts that are harder than the rest of thstone. The hardness of the plain blue variety is comparable to that of the black serpentine stone (also called Springstone). Alabaster is easily sculpted by means of cutting, rasping, sanding and polishing.
If you start with a hammer and a chisel, be careful not to shatter too much of the translucent structure towards the interior of the stone. Which is why in sculpting alabaster I use almost exclusively a tooth chisel and rarely a pointed chisel, which often leaves deeper white “bruise-like” spots. If you are using a chisel and don’t want to end up with white spots, you should use a rasp or a file for the last millimeters. Sanding alabaster should be done with waterproof sandpaper with grit sizes between 60 and up to and including 2000 for high-gloss finish, followed by a stone wash treatment, such as Marpol or Cerapol.

ALABASTER FOR CARVING: AVAILABILITY
Alabaster is available in lumps/boulders, discs and blocks. Lumps are the alabaster stones in their original form upon excavation. They have a spherical shape and their surface is irregular. Their “shell” or “crust” may be of a different color than the finished sculpture. The alabaster discs are slabs sawn from lumps. They therefore display the crosscut section of the lump and their contour is the rough surface of the lump. Alabaster blocks are sawn from the center of the lumps and have the clearest composition because they do not contain any impurities. Because of its composition, alabaster is not weatherproof. The effects of the weather will turn a glossy polished surface into a dull and rough structure.

For an overview of my alabaster sculptures, click here.

Alabaster for carving is available at De Beeldhouwwinkel